Some of the most exciting food in Atlanta today is served out of borrowed kitchens, at farmers markets, and from food trucks. From beautifully wrought cream puffs to hearty Taiwanese breakfast, here’s some of our recent faves, and where to find them.
Photograph courtesy of Thicc Burger
In every issue of Atlanta magazine, we highlight a different pop-up or food truck worth seeking out, and we’ve compiled all of our recent picks below. We’ll update this list monthly. By their nature, these businesses can be inconstant; best to check their Instagram accounts for the latest on where to find them.
Photograph courtesy of Thicc Burger
Thicc Burgers
Jay Wolfe likes burgers so much that they have a tattoo of one—and it’s life-size, they said: “People are like, What do the burgers look like? And I just show them my arm.” The burgers people ask about are those that Wolfe sells through this pop-up, which they launched in Los Angeles during the pandemic, then brought to Atlanta when they moved here. For Wolfe, the burgers are an exercise in nostalgia: The OG Thicc Burger—the flagship product, with cheese, caramelized onions, Thicc sauce, and the usual fixings—“tastes exactly like the burgers I grew up eating” at California mom-and-pops. Also available: a patty melt, wings, tacos, and, of course, fries.
Wolfe is interested in other people’s nostalgia, too, so when they traveled to New York last year and had a chopped cheese—a beloved bodega special with ground beef and melted cheese on a hoagie roll—they added a version to their own menu; dubbed the Screwburger, it is gooey, fatty, and unabashedly delicious. Thicc Burger lives in Atlanta these days, though Wolfe describes the operation as a “roaming old-fashioned burger joint,” and it isn’t completely tied down: Wolfe occasionally takes the show on the road, popping up in cities across the country. But most of the time, you can find them at breweries around town. May 2022
Photograph courtesy of Jackalope ATL
Jackalope ATL
“It is the new f-word,” Dave Mouche concedes—referring to “fusion,” a label Mouche also, if reluctantly, embraces. At some point fusion got a bad rap, but it aptly characterizes Mouche’s cooking, which combines elements of various Southeast Asian cuisines—Thai, Vietnamese—in playful, easy-to-like ways. A po’boy that Mouche makes reflects the culture of Houston, where he grew up: It’s filled with catfish marinated in turmeric in the style of the Vietnamese dish cha ca, then served with dill remoulade (and Cajun fries). He serves a “chili” dog where the chili is the fiery Sichuan preparation ma po tofu and, similarly, a sloppy joe filled with Korean army stew.
Photograph courtesy of Jackalope ATL
Mouche, whose previous career was in tech, took up cooking while living in Seattle; he moved to Atlanta and got Jackalope off the ground during the pandemic, working for a while as a prep cook at Talat Market. The name, he says, “harkens back to my heritage and my food style. I’m half-Thai and half-white; it’s an animal that has a foot in both worlds.” He’s interested in the places where cultures meet—in foods like khao mok gai, a Thai chicken and rice dish with Muslim and Malaysian influences. “‘Jackalope’ encapsulates that,” he says. “It’s not really a rabbit, it’s not really a deer. It’s something made up that’s both.” April 2022 issue 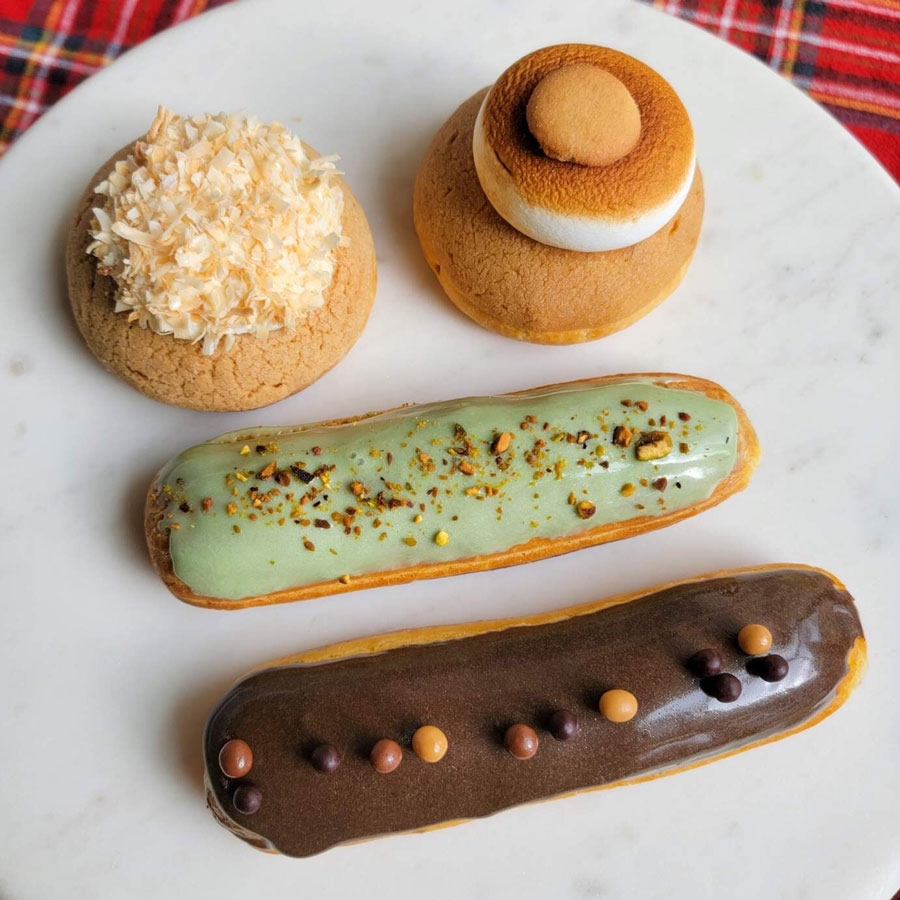