密碼設定成功，請使用新密碼登入
(Twitter, Amy Qin screenshot) (Twitter, Amy Qin screenshot)
TAIPEI (Taiwan News) — The New York Times on Wednesday (Jan. 19) posted a story on its front page about the growing opinion among Taiwanese citizens that they have a separate identity in response to attempts by China to coerce Taiwan into uniting with the communist autocracy.
Titled "‘We Are Taiwanese’: China’s Growing Menace Hardens Island’s Identity," reporters Amy Qin and Amy Chang Chien explored the ways Taiwanese society has evolved over the decades by interviewing members of a family that represents two very different generations in Taiwan. Li Yuan-hsin, a 36-year-old high school teacher typifies the younger generation that considers themselves to be distinctly Taiwanese, while her 82-year-old grandmother Wang Yu-lan represents an older generation of Kuomintang (KMT) that still thinks of themselves as Chinese.
Although the ancestors of over 90% of Taiwanese citizens arrived in Taiwan from China at some point in the past 300 years, most think of themselves as having a unique identity that is separate from China. The authors point out that constant pressure by the Chinese Communist Party (CCP) to compel Taiwan to unite with China has only stiffened Taiwanese resolve.
Recent surveys have shown that most Taiwanese do not wish to be annexed by China, nor do they seek formal independence due to the threat of war. With Chinese Chairman Xi Jinping (習近平) publicly making the absorption of Taiwan a top priority for his legacy, tensions are at their highest in years as he continues to intensify a pressure campaign to convince Taiwan to capitulate.
Wang represents the old guard who fled China 70 years ago and still has a closer cultural affinity to China, having fled to Taiwan in 1948 in the midst of the Chinese Civil War. She still retains many aspects of Chinese culture, such as painting Chinese ink landscapes and playing the erhu, but was indoctrinated in anti-communist slogans such as “Recapture the mainland from the Communist bandits!”
Li, who was born in Taiwan, insists that she is Taiwanese, and has continued to grow increasingly wary of China after its crackdown in Hong Kong and exclusion of Taiwan from the WHO during the pandemic. The authors pointed out that Li represents the 62.3% of citizens who consider themselves Taiwanese, as opposed to 31.7% who think of themselves as Chinese in the latest Election Study Center poll, a dramatic shift from 17.6% selecting Taiwanese and 46.4% opting for Chinese in 1992. 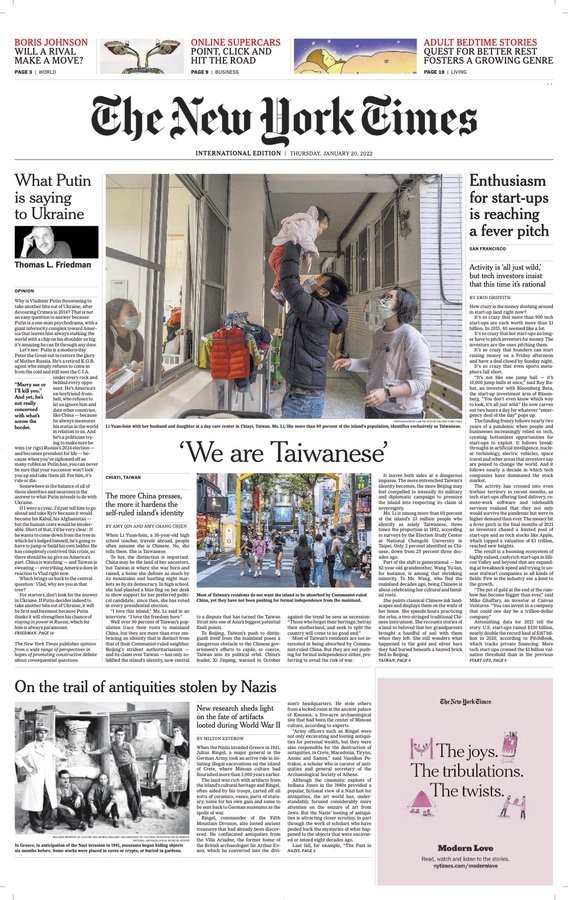