密碼設定成功，請使用新密碼登入
Kaoyuan University in Kaohsiung's Luzhu District. Kaoyuan University in Kaohsiung's Luzhu District. (Wikimedia Commons photo)
TAIPEI (Taiwan News) — A legislator joined two NGOs Friday (May 6) to accuse Kaohsiung's Kao Yuan University (KYU) of luring students from developing countries to do internship programs, only for many to end up working arduous factory jobs unrelated to their studies in order to remain in the country.
Two KYU seniors recruited from their alma mater, Philippine Christian University, to participate in a work-study program described their experiences to Taiwan News on condition of anonymity early last month.
Both said they have worked at six factories in northern Kaohsiung and Tainan since arriving in Taiwan in the fall of 2018.
Their duties have spanned packaging, grinding, and cleaning as well as welding — despite lacking prior experience. They and other Southeast Asian workers were required to clean the restrooms after their shifts.
One of the students, nicknamed Lily, said that while employed at a factory owned by fastener manufacturer NES, she was the only female machine operator in the production department. "Every day I needed to bend and press the metals," she said.
She added that she was only provided one pair of gloves every two weeks. However, they would be in tatters after two days and she would tape up her hands in an effort to protect them.
It was dirty work, and the factory was stifling, Lily said. When she brought an electric fan to work, it was taken away; only the Taiwanese employees were allowed fans, the students said.
It was also hazardous. Lily recalled that one of her coworkers lost a finger in her machine. Compounding the risk was the 2,000 pieces-per-hour quota. She said from day one she was expected to meet 60% of this quota, which would frequently take until around midnight to do; she said she was not paid overtime.
Lily said that after she damaged two machines when she inserted the metal pieces incorrectly, the factory deducted the cost for repairs from her salary.
When she lost her job during Taiwan's first major outbreak of COVID-19 last summer, her advisor gave her a failing grade for her internship, though she had no alternative employment options at the time. It was not until last month, once the Ministry of Education started investigating the school, that she was given a chance to substitute the internship with two classes, according to a ministry official.
The other Filipino student said the dirt and metal dust at a previous factory where he was a welder gave him eczema. Yet he continued to weld so he could make tuition payments. "We came here to study and have a degree, it seems like we’re cows milked by them. They just care about our money," he said.
These and other students from the Philippines as well as Indonesia have told Taiwan News they have been working 40 hours per week, and often more, starting in their second year. They are then expected to attend classes at 8 a.m. the next day.
According to Taiwan's Employment Service Act, foreign students are only allowed to work a maximum of 20 hours of work per week.
The school labels 20 of students' 40 hours their "internship," though their work does not change over the course of an eight-hour shift. Taiwan News has obtained audio of a Taiwanese man students claim is a school official instructing students to explain this 20-20 division if they are contacted by government officials.
A second female Philippine student provided Taiwan News with both her "real" payment receipt from a factory and a "fake" one school officials had given her. Another student has provided Taiwan News with images of two separate debit cards allegedly given her by the school: one for her official work and one for the six-credit "internship," which the factories grade per an arrangement with the school.
"It's like a facade, like a cover-up," one male student from the Philippines said of the internship. He said Kao Yuan had not mentioned such an internship while recruiting in Manilla and added that it's unusual for a student to start interning in their second year of college.
The Philippine students at Kao Yuan are recruited by JS Contractor Inc., a human resources company operating out of Manila and Cebu. Students said were drawn to the program due to the dorm scholarship, the prospect of paying their way through school, and the experience of living abroad. 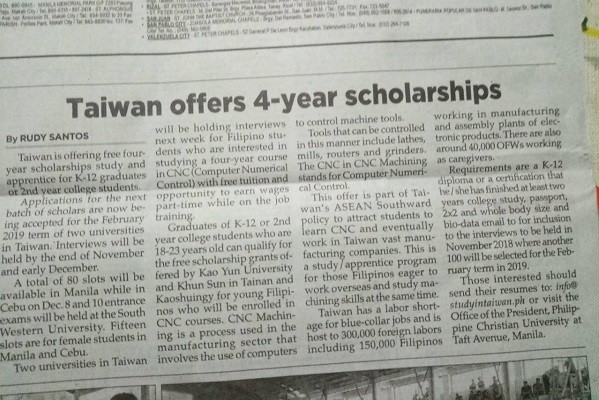 Nov. 12, 2018 Philippine Star article on KYU and Kun Shan University scholarships. (Taiwan News screenshot)
Lily and the male student were among the first batch of students from Philippine Christian University accepted into the program in the summer of 2018. However, it was not until shortly before the start of the fall semester that they were told they needed to pay about NT$63,000 in fees.
By then, the pair said they had already committed to the trip. According to receipts seen by Taiwan News, the students paid that amount in monthly increments of NT$3,530 to Family Financial Management Consultant LTD., based in Taipei's Zhongshan District.
However, some foreign students working at factories view their experience as worth it. A senior majoring in IT degree at another university in Southern Taiwan said that while the work is difficult, it is a chance she would not have had back home, and she plans to stay to pursue her master's.
Having heard about Taiwan News' investigation, President Jaw Bih-shiaw (趙必孝) wrote this agency a letter questioning the legitimacy of any information provided by the students. He added, "When our companies learned of (a student's) statements, they utterly denied the accusations."
Jaw claimed "biased reports" could deprive Filipino students of a "once-in-a-lifetime" opportunity to improve their prospects.
Attached to the letter were statements from several students praising the apprenticeship program, with some stressing their eight-hour shifts comprise a legal four-hour part-time job plus a four-hour internship. According to Taiwan News sources at KYU, students in at least one class were asked by staff to write statements.
Friday morning (May 6), Legislative Yuan member Fan Yun (范雲), Taiwan Association of Human Rights Secretary General Shi I-hsiang (施逸翔), and Taiwan Labor Front Association Secretary General Sun Yu-lien (孫友聯) held a press conference on the situation at KYU after a student reached out to them.
They played video statements from two Filipino students who described their time at KYU as "misery." Sun, Fan, and Shi also blasted the alleged illegal hours and forged payslips, questioned the quality of education given KYU's high student-teacher ratio, and said the university's international advertising was misleading.
"Ministries and associations should work together to do a good job checking and stop allowing Taiwan's higher education policy to become a black hole in human rights," the trio said in a joint press statement Friday.
The controversy around Kao Yuan echoes that of Chung Chou University, which was barred from enrolling new students last year for forcing Ugandan students to work in factories as "interns." Similar incidents in recent years involved Eswatini students from MingDao University in 2020 and Sri Lankan students at the University of Kang Ning in 2018.
A growing number of Taiwanese universities are facing enrollment shortfalls as the country's birth rate continues to plummet. Recruiting foreign students, particularly those from New Southbound countries, is a way schools can try to shore up student numbers. 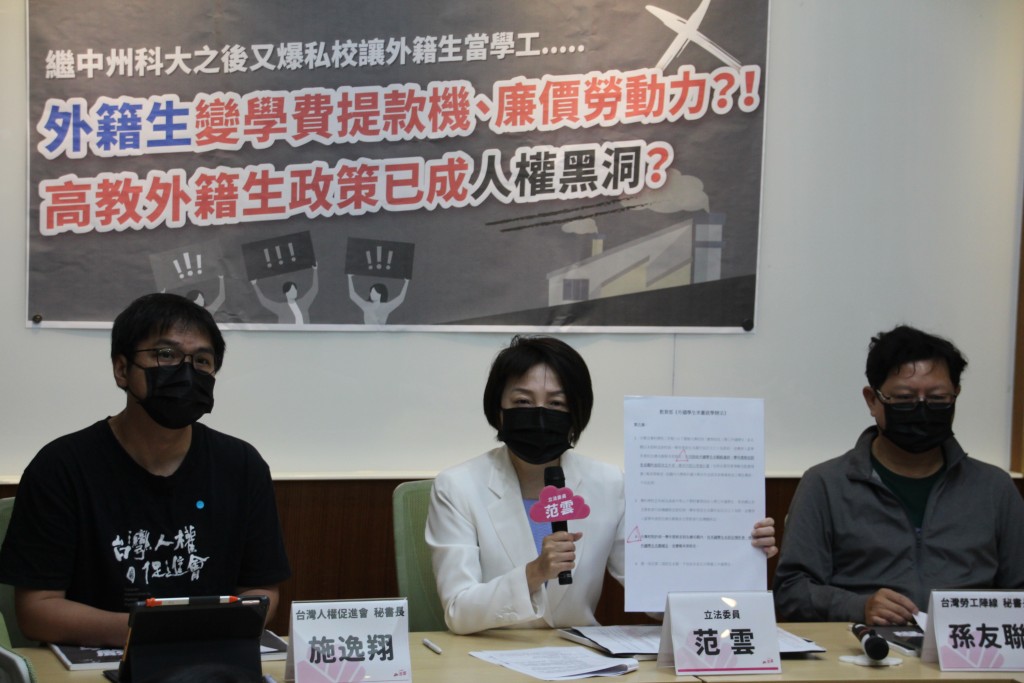