Skip to content
Your browser does not support JavaScript, or it is disabled．Please check the site policy for more information.
The Asahi Shimbun
Politics
article
REUTERS
October 21, 2022 at 12:45 JST 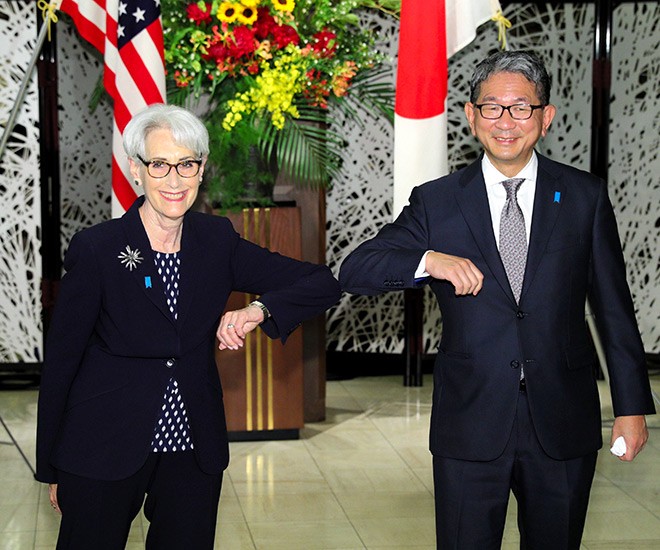 U.S. Deputy Secretary of State Wendy Sherman, left, elbow bumps with Japanese Vice-Minister for Foreign Affairs Takeo Mori, right, prior to their meeting at the Iikura Guesthouse on July 20, 2021, in Tokyo. (Pool)
WASHINGTON–U.S. Deputy Secretary of State Wendy Sherman will discuss North Korea’s recent missile launches, China and tensions over Taiwan, in meetings with her Japanese and South Korean counterparts in Tokyo next week, a senior State Department official said on Thursday.
Sherman’s Oct. 24-26 Tokyo trip will include a trilateral meeting with Japanese and South Korean counterparts and bilateral meetings with each country, the official told reporters.
“We will discuss a range of issues, including the DPRK’s numerous ballistic missile launches this year, the PRC, and Russia’s unprovoked and devastating war against Ukraine,” the official said, referring to North Korea and China by the initials of their official names.
“We intend to discuss the whole panoply of issues that deal with regional security, and Taiwan is a big part of that.”
The talks with Japan are also expected to cover Japanese
defense reforms and a new national security strategy Tokyo is working on, the official said.
Sherman will travel to Asia at a time of heightened tensions over North Korea and Taiwan, a self-administered island China claims as its own.
North Korea has conducted an unprecedented number of ballistic missile launches this year and Washington and its allies believe it may also be about to resume nuclear bomb testing for the first time since 2017.
U.S. Secretary of State Antony Blinken warned on Monday that Beijing was determined to pursue reunification with Taiwan “on a much faster timeline,” though he did not specify a date.
The top U.S. general said last year that China was unlikely to try to militarily seize Taiwan in the next couple of years and the commander of the U.S. Indo-Pacific Command at that time told Congress this threat could manifest itself within six years.
However, the head of the U.S. Navy, Chief of Naval Operations Admiral Mike Gilday, told the Atlantic Council on Wednesday that U.S. forces must be prepared for the possibility of an earlier Chinese invasion, without predicting one.
“When we talk about the 2027 window, in my mind that has to be a 2022 window or potentially a 2023 window,” he said.
China’s leader Xi Jinping told the five-yearly congress of China’s ruling Communist Party on Sunday that Beijing would never renounce the right to use force over Taiwan, but that it would strive for a peaceful resolution.
U.S., S. Korea fly 20 fighter jets amid North Korea tensions
U.S., South Korea, Japan envoys meet on North Korea nuclear tension
North Korea fires missiles after Harris leaves South Korea
U.S., Japan, S. Korea send clear message to N. Korea — U.S. diplomat
South Korea’s Yoon calls for coordinated U.N. response to North Korea’s provocations–media
U.S. to brief Japan, South Korea on North Korea review