From a line-up stacked with regional talent to prime networking opportunities and a fascinating venue, this is what you can expect from the first in-person edition of ASEAN Music Showcase Festival in Singapore this September
In partnership with ASEAN Music Showcase Festival
As the live music machine revved into life earlier this year, it unleashed a slew of gigs, concerts, and festivals across the region. A lot is going on, and events are taking it as an opportunity to bring their A-game and stand out from the crowd.
Case in point: the ASEAN Music Showcase Festival, which launched in 2020 with an online event that live-streamed performances from Singapore, Malaysia, the Philippines and more. This year, in anticipation of its first-ever in-person event, it has assembled an extensive line-up of 40 acts to spotlight the best and buzziest music coming out of Asia. On the weekend of September 10-11, these artists – and over 60 music industry delegates – will gather in Singapore and descend on one of the country’s most interesting venues, Haw Par Villa.
If you’ve been reading us, you know NME Asia is all about supporting talent from the region and elevating artists of all sounds and styles to greater heights. That’s why we’re proud to come on board as official media partner for ASEAN Music Showcase Festival – and excited to offer interested attendees a 20 per cent discount on tickets via the code NME20, which is active now till the end of the festival. Get your tickets here now.
If you’re not convinced yet, here are three reasons why you should clear your calendar for ASEAN Music Showcase Festival this September.

Apart from entertaining a live crowd for the first time, ASEAN Music Showcase Festival 2022 will also welcome some of the hottest, up-and-coming acts from all over Asia to the Lion City for the first time. These include the likes of Thai genre-blender – and BandLab NME Awards 2022 nominee – Alec Orachi, Indonesian rapper Basboi and singer-songwriter Pamungkas, Taiwanese post-rock mainstays I Mean Us, rising Indian jazz outfit Jatayu, Filipino dream poppers KRNA, among many others.
Besides standalone performances from artists, ASEAN Music Showcase Festival will also feature three label showcases from Thailand’s Yupp! and High Cloud Entertainment plus Cambodia’s Baramey. Even as music industries worldwide splinter due to digital disruption, record labels can still make magic happen by bringing much-needed artist development and curation to the table – these three special sets will demonstrate just that.
There’s something for everyone at ASEAN Music Showcase Festival, whether you’re looking for off-kilter electronics (Fauxe, Logic Lost), mathy, complex rock (Amateur Takes Control, Cues, The Filters) or alt-pop (NYK, Ffion). And this is a great opportunity to catch artists who are the cusp of reinvention or about to make big moves: Cambodian hip-hop hero VannDa is going to the next level with his scorching second album ‘Skull 2 (Season 1)’, while SOS from the Philippines are gearing up for a new era post-She’s Only Sixteen. Who knows – the next time you see some of these artists live, they could be playing theatres, or even stadiums. 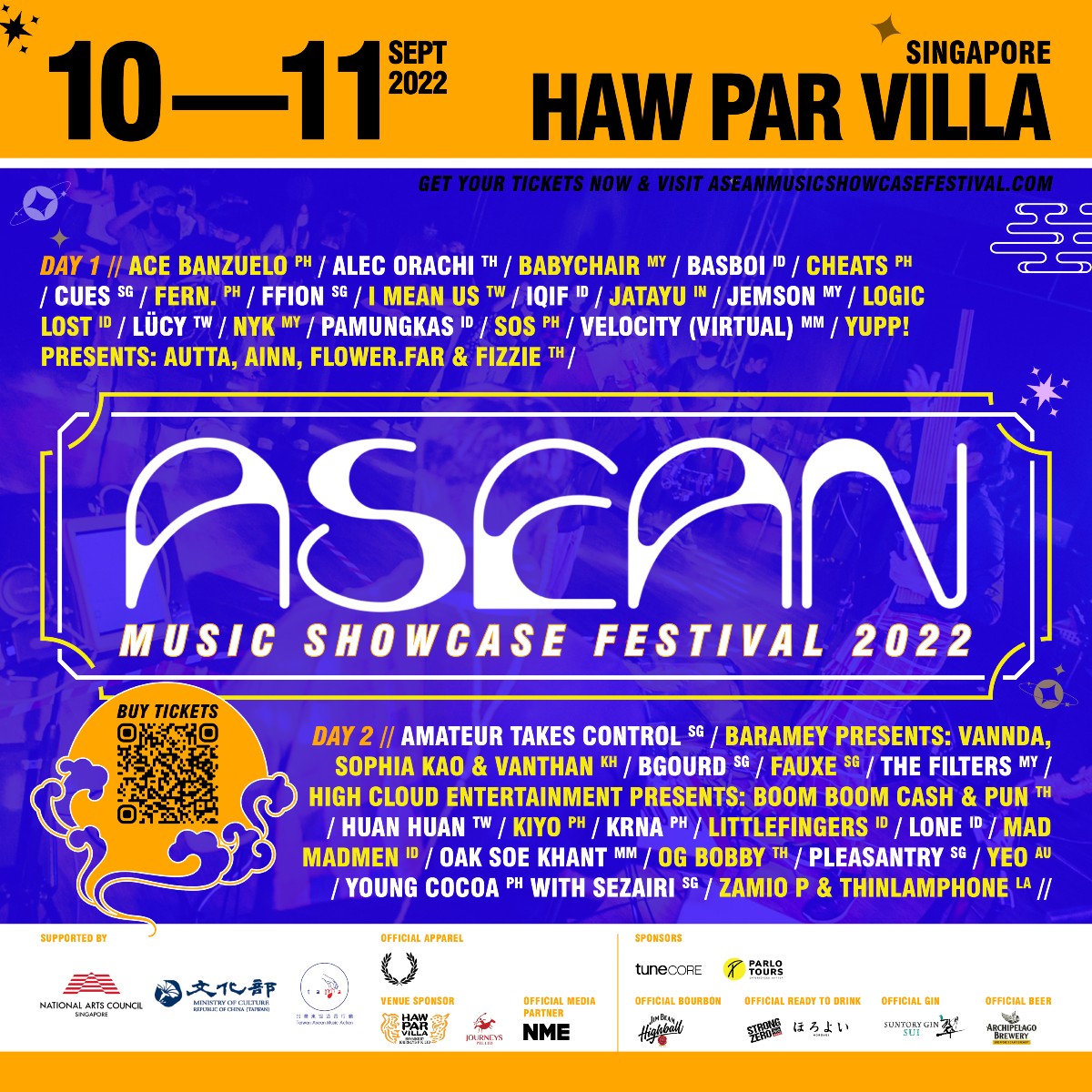 The prospect of entering or joining a wider creative industry can be a daunting prospect, regardless of whether you’re a fan or creator. If you’re interested in dipping your toes into the music industry, ASEAN Music Showcase Festival is a great place to start. As we’ve explained, it boasts a stellar line-up, but with over 60 key members of the music industry from Tbilisi to Ulaanbaatar attending in person and virtually, it’s also a prime opportunity for musicians and others in the wider ecosystem to network and share their tips and tricks.
If you’re interested to talk to someone from a record label at ASEAN Music Showcase Festival, this year’s event will be attended by execs from Thailand’s High Cloud Entertainment, Singapore’s Umami and Where Are The Fruits, Island Records Philippines, Indonesia’s Sun Eater, Dominion Records and Maspam Records, and Malaysia’s Tala Records Asia among others.
Delegates on the forefront of the resurging live music business include John Uy from Philippines’ Wanderland Music & Arts Festival, Thailand’s ‘Top’ Sarun Pinyarat from Maho Rasop Festival and Phuong Le from Wonderfruit festival, Johnnie Moylett from Fuji Rock Festival in Japan, Weining Hung from Taiwan’s LUCfest and more.
And representing their respective companies from the wider music industry ecosystem are Singapore’s Edwin Waliman from PR and services firm Secret Signals, South Korea’s Lisa Wong from 360 Entertainment, Christine Su from Taiwan’s Golden Melody Awards, known popularly the Chinese Grammys, the Netherlands’ John Willame from Smallfish Agency and Rob Kelso from Summer Sonic Festival – just to name a few.
Now that travel is back on the cards, there’s no time like the present to forge cross-border connections and collaborations – whether that’s linking up a promoter who can book you a gig overseas or finding a music agency to intern for. After all, your impact is only as good as the people you work with and learn from.

For its debut live event, ASEAN Music Showcase Festival is aiming to set itself apart from other festivals and conferences in the region, and one way it’s doing just that is with its venue: the iconic Haw Par Villa theme park in Singapore.
For the uninitiated, Haw Par Villa is a historic park filled with strange (at times nightmarish) sculptures and dioramas that depict scenes from Chinese mythology, folklore and classic tales, like the Journey to the West and Romance of the Three Kingdoms. It’s particularly famous – and feared – for its 10 Courts of Hell attraction that takes you through the grim and ghastly levels of the netherworld.  It’s safe to say you’ve never experienced such a music festival of this calibre and scale in such a fascinating setting… see you in hell?
The ASEAN Music Showcase Festival takes place September 10-11 at Haw Par Villa in Singapore with the support of NME Asia as official media partner. Tickets (one-day and two-day passes) are now available here – use the code NME20 at checkout to get a 20 per cent discount.
The world’s defining voice in music and pop culture: breaking what’s new and what’s next since 1952.
When you purchase through links on our site, we may earn an affiliate commission.
© 2022 NME is part of NME Networks.