Skip to content
Your browser does not support JavaScript, or it is disabled．Please check the site policy for more information.
The Asahi Shimbun
National Report
article
By SHINICHI KAWARADA/ Staff Writer
October 6, 2022 at 17:19 JST 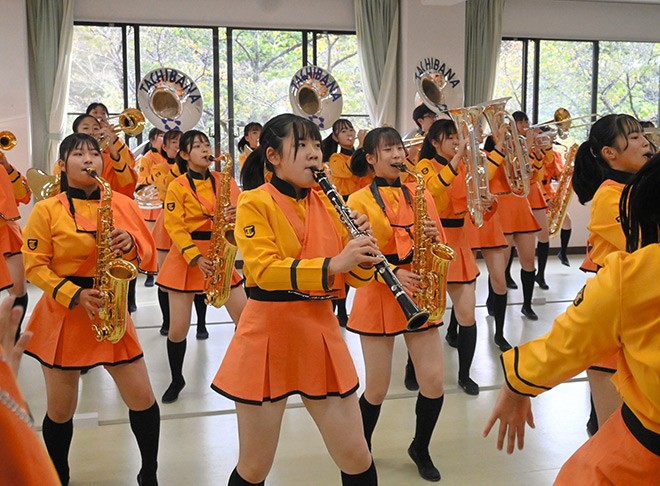 Members of the brass band club at Kyoto Tachibana High School give an energetic performance at the school in Kyoto city on Sept. 28. (Shinichi Kawarada)
KYOTO–A Japanese high school marching band nicknamed the Orange Devils will become the first overseas musical group ever to perform during Taiwan’s National Day celebrations next week.
Around 90 members of the Kyoto Tachibana High School marching band departed from Kansai Airport on Oct. 5 on their trip to Taiwan.
They are scheduled to perform during the holiday on Oct. 10 in Taipei for 12 minutes in front of the Presidential Office Building for Taiwan’s President Tsai Ing-wen and other dignitaries.
National Day is Taiwan’s equivalent of Japan’s National Foundation Day and comes with large-scale celebrations.
“I researched the celebrations by watching videos and through other means,” said Yuki Shigekuni, a third-year student and the vice head of the brass band club at the high school. “I was astonished at how huge they are.”
The marching band gained its unusual nickname because of its energetic performances and vibrant orange costumes.
When Hsiang Ming-teh, the director of the Taipei Economic and Cultural Office in Osaka visited a classroom at the Kyoto city high school on Sept. 28, members of the school’s brass band club donning their bright orange costumes welcomed him by playing the popular jazz song “Sing, Sing, Sing.”
The school’s band is considered one of the best school marching bands in Japan and will represent the Kansai region when it competes at a national marching band contest in Osaka city in November.
Performances by the Orange Devils have been watched by Taiwanese on YouTube and other social media platforms and some have become enthusiastic fans.
The band was invited to play at the celebrations as the Taiwanese organizers “wanted people to see the band’s energetic and dynamic performance, especially because we are in a difficult era with things like the pandemic and the war (in Ukraine).”
Members of the band were stunned when they were informed in May that Taiwan had invited them to perform.
The students on the Taiwan trip are scheduled to meet students from the Taipei First Girls High School, which is known for its team of honor guards, on Oct. 6.
The band has also been invited to play at a ceremonial concert to be held at the National Concert Hall in Taipei.
It will play a fanfare that Wen Lung-Hsin, a Taiwanese composer, created for Kyoto Tachibana High School, as well as Japanese anime songs and a tune that incorporates the famed Japanese folk song “Soran bushi.”
The trip has become a lesson in cultural diplomacy for the students, as band members spent time learning about Taiwan and its history through online lectures before their travels.
Misaki Takeuchi, a third-year high school student who is head of the brass band club, said, “I believe that various things (in history) have occurred with regard to relations between Japan and Taiwan, but it’s great that we are able to meet Taiwanese people and build friendships with them.”
Hsiang said it is important that students “who will lead the next generation communicate with one another.
“I hope understanding of Taiwan will be passed onto the next generation,” the director said.
High school band with Kyoani ties performs concert for arson victims
China criticizes Japan’s handling of Taiwanese at Abe’s funeral
Survey: Taiwan’s fondness for Japan reaches record high
City works with orchestra in new El Sistema music program for kids
INTERVIEW: Pianist Sumino seeks balance with his YouTube influencer Cateen
Pianist Sorita leads orchestra with machine tool maker