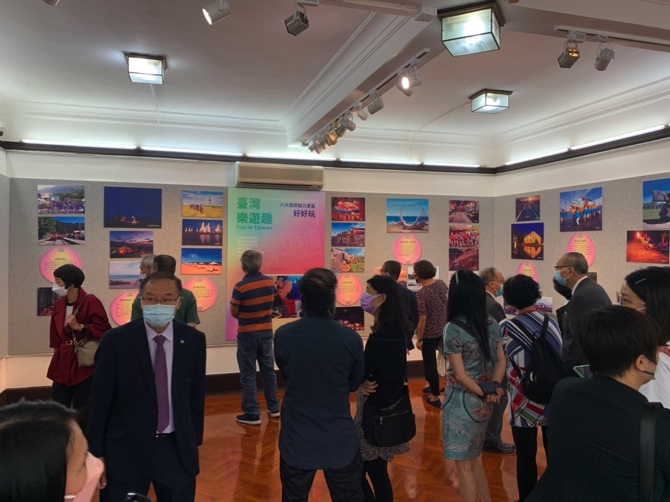 A photo exhibition was opened yesterday at the Dr Sun Yat Sen Memorial House in the attempt to encourage tourism to Taiwan.
The exhibition has been organized by the Taipei Economic and Cultural Office in Macau and will be on show from now until the end of the month.
A collection of photos capturing both the geographic, gastronomic and human scenery of Taiwan are posted on the top floor of the memorial house, which was built with Islamic Moorish influences.
Through the exhibition, the office hopes to recall the memories of people from Macau of their travels in Taiwan, as well as reinvigorating their desire to return to the island. The pictures were collected with the help of the tourism authorities in Taiwan, the Office added.
Geographically and topically curated, the exhibition showcases elements from Taiwan’s six major scenic areas, namely the North Coast, the Dune Art Field, the Sun Moon Lake, the Alishan Mountain, the East Coast and the Gold Coast, in addition to four topics of ecology, culture, gastronomy and lifestyle.
Upon entering the memorial house, viewers will immediately see images depicting the exterior and cabin of an aircraft. They are provided by the two Taiwanese airlines serving Macau-Taiwan routes.
Separately showcased in three parlors, the photos are thoughtfully arranged to resemble certain settings, as the host explained. For instance, the “food” section of the exhibition is arranged as if viewers are taking a train ride in Taiwan, since photos are presented irregularly, mimicking the shakes made by a train’s movement.
The food section greets viewers with images of famous Taiwan delicacies, such as bubble tea and braised pork rice, as well as many other food items.
Furthermore, viewers will also be able to have a glimpse of the lifestyle of Taiwan, if they have not been to the island. A few images featuring Taiwanese indigenous peoples are also on display.
Taiwan will finally open its borders to foreign arrivals, but has different border policies for people from mainland China, Macau and Hong Kong due to the “lack of reciprocity,” according to a report by Taipei Times yesterday.
The Taiwan government will end mandatory quarantine for incoming travelers on Thursday “except those from Hong Kong, Macau and China.”
The government last month announced that starting on Sept. 29, people from China and the two territories who wished to visit Taiwan “could apply on the grounds of humanitarian, family or business needs, and that their applications would be considered in light of regulations.”
According to Taipei Times, the policy would be “subject to rolling reviews according to Covid-19 pandemic conditions, the state of cross-strait ties and other factors,” officials said at the time.
However, on Sept. 28, China’s Taiwan Affairs Office questioned the policy and called for the “small three links” — commercial, transportation and postal exchanges between Kinmen and Lienchiang counties, and China’s coastal cities — to be restarted, the report says.